﻿Shing Mun Redoubt is one part and the most important part of the Gin Dinker’s Line, which was the British military defensive line against the Japanese invasion of Hong Kong during the Pacific War. It was built from 1936 to 1938 and the redoubt was the defensive headquarter, it served as guarding the most vulnerable part of the land route in Kowloon. At first, the British predicted that the redoubt could protect for about 3 weeks. However, it could not defend against the Japanese army and collapsed within 3 hours in the morning on 10th December, 1941. It showed that the British defense army and the redoubt were inefficient and insufficient.

The place is important since it is the only one which preserves quite completely as it did not damage seriously during the battles, and has become a Grade 2 Historic Building in Hong Kong. Therefore, it serves as a valuable site for reviewing the wartime history and the failure of it (the video at the bottom can provide an answer). It becomes an attractive place as people can still see the defensive structures quite clearly. A Hong Kong movie, Tactical Unit - Comrades In Arms (機動部隊 - 同袍), had shot a scene from this place. ﻿

WHAT YOU CAN SEE?

There are some signs saying that “Danger, desolate trench, do not enter”. When you see these signage, you are already reached the redoubt, but in fact, people can go inside to take a look of it. There are some defensive structures remaining at the site, for example, bunkers, pillboxes for machine gun, trenches and artillery. You can see some bombings and some bullet traces on some of the trenches.

As you can see from the photos above, the trenches looks so like tunnels, which connect all part of the redoubt. The tunnels are not high and the entrances are so small, so that you have to walk like squatting as same as the soldiers. In fact, it is safe to walk through the redoubt since most of the structure are still solid, though it is quite dark inside the tunnels. Moreover, the British army had named the tunnels using the London streets and buildings names, such as Regent Street, Shaftsbury Avenue etc. You can see them clearly at the entrance of those tunnels. Since the redoubt was taken by the Japanese army. One of the Japanese leaders who had fought during this battlefield, Lieutenant Wayabiyashi, had inscribed his name, in Chinese (若林東一), on the wall near one of the tunnel entrance, to show that his army had defeated the British army and taken the redoubt.
﻿WHERE IS IT?﻿ 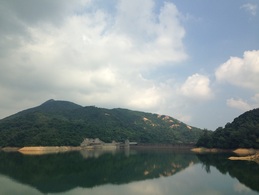 HOW TO GET THERE?

3) Walk along the Shing Mun reservoir and pass by some barbecue areas (about 15 minutes), you will see the public toilet and the entrance of the Maclehose Trail (Stage 6)
FURTHER READING:

1) Video on Shing Mun Redoubt by Department of real estate and construction in the University of Hong Kong (with Chinese and English subtitles) – Why and How the British army was defeated in such a fast pace.
https://www.youtube.com/watch?v=ScAjjlgBl1A

2) The defense of Hong Kong: Shing Mun Redoubt and the Gin Drinker’s Line
http://hksw.org/Shing%20Mun.htm
Powered by