Hoi Ha Wan translates as ‘Bay Beneath the Sea’. It locates in Sai Kung West Country Park. Hoi Ha Wan Marine Park was established in 1996 and it is a protected area.

Ecology:
Hoi Ha Wan is famous for its good water quality and diverse marine lives, which contains 60 types of hard coral and 120 species of coral fish. There are mangroves and various marine organisms including crabs, starfish, jellyfish, sea urchins, sea slug and even sea horses, which are uncommon. It demonstrates the ecological significance in Hoi Ha Wan.

Recreation:
Many visitors engage in different activities in Hoi Ha Wan Marine Parks because of its good water quality. It is a good spot for swimming, scuba diving and snorkeling. However, visitors must be careful to avoid damaging the natural habitats. 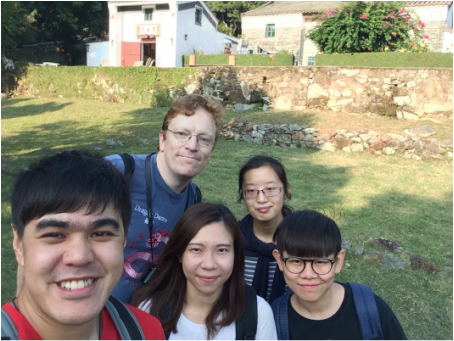 History:
There are 4 remnants of limekilns in Hoi Ha Wan and the finest Hakka village with special architectures. When you walked further away from the marine park for 30 minutes, you can see some sheds, farmlands and Hakka’s ancestral shrine. These buildings and remnants reflect the history of Hoi Ha Wan. About 100 years ago, the Yung’s brothers established Hoi Ha village in Hoi Ha Wan and they engaged in fishery initially. Later, some Hokka people moved in and started limekiln industry. They made use of the coral skeletons and oyster shells nearby the sea and refined them for the construction and agriculture use. This explained why there are limekiln remnants and Hakka village in Hoi Ha.

Hoi Ha Wan is one of the "ecotour" hot spots, but it is not fully protected. Most tour guides and tourists do not understand the meaning of ecotourism and their behavior can harm the ocean ecology like collecting shells or playing with sea creatures. Also, some inconsiderate tourists litter or step on corals. The misbehavior causes great damage to the environment and ecosystem of Hoi Ha Wan.

The Town Planning Board will plan to build about at least 60 houses near the main stream of Hoi Ha Wan. It will destroy the coral communities and the natural habitat, as the domestic sewage will flow into the river. The environmental damage is irreversible including the extinction of marine species. Some environmentalists has produced a documentary with the title “ Save Hoi Ha and Pak Sha O” to pressure the government and arouse the environmental awareness of the public. Apart from that, the Hakka traditional houses will also be destroyed in order to build more village houses. It can lead to the damage of Hakka tradition and culture.

The above cases show that the Hong Kong government put little attention on environmental or cultural protection. Although Hoi Ha Wan has been designated as SSSI and Marine Park, there are no strict laws enforced to protect Hai Ha Wan fully.   ﻿

How to get there:

Take the route 7 of green minibus at the bus stop outside the 711 convenience store by the Sai Kung Ferry Pier. You can also take the taxi  in the pier to Hoi Ha.
Powered by